Due to other 'more immediate' commitments, blogging is taking a back seat...no more a passenger seat. I still hope to keep reviewing for The Music Magazine, as I am now a part of such a great community there, and write the occasional report/review. So more commentary, thoughts and ideas than huge reports and articles.

I hope to write a weekly summary of the music week as and when the mood takes me. First one at the start of March...
Posted by Chris at 13:22 No comments: 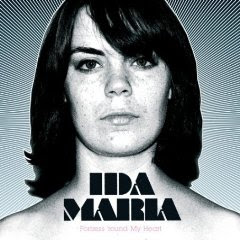 What a wonderfully beguiling figure Ida Maria Sivertsen is. A product of Norway's answer to X-Factor and Pop Idol, the singer quickly gained a following in the UK thanks to some ear-catching singles and some spirited festival performances. The UK has a tendency to attract Scandinavian musicians, from Abba to Björk, and there is always a fan base. But not all Scandinavian music is the same and Ida Maria is certainly no exception; she is feisty and passionate, slightly odd (she has synesthesia which means colours appear when she hears sounds) and has that elfin charm common with Norwegians. All this comes out in her music and forms the body of her debut album Fortress 'Round My Heart. Now, as seems to be the trend with artists who do not get prominent airplay first time around and then get popular, the album is re-released albeit with a different track order and a few extra songs.

Anyone who can turn such annoying Americanised blasphemy popular with brats into a fantastic pop-punk anthem is worthy of some praise. And opener Oh My God is exactly that - starting with the line 'Find a cure, find a cure for my life' repeated ad-nauseam before flying into the chorus, the song is three minutes of frantic, edgy and jaded vocals framed by very subtle and well conceived instrumentation (and some of the best drumming on the album). This curious juxtaposition does eventually converge into a single entity at the half way point before an even bigger schism complete with gorgeous falsetto backing vocals, cracking vocals and a climax of orgasmic proportions in which the drum kit ends up in pieces, scattered across the recording studio. Fantastic.

From here, the energy and drama continues. Morning Light is much more straight-forward pop, even if peppered with insane hollow laughter. The guitar work is suitably jangly and upbeat, like early 80s Britpop. Queen Of The World, another early single, is another great 'story' of feeling high when everything around you is low. Summed up by the lyrics 'I got no plans for tomorrow...In fact I'm free this week, I'm free this month, I'm lonely, lonely this year, lonely forever...'. The manic depressive nature of the album (and Ida Maria's character) could not be any clearer. Stella is another key track, slower and with a soaring chorus and some more great guitars. The simple repetitive formula is protracted into the last moments in which the vocals crack and break completely, adding a stark vulnerability. Forgive Me is in contrast quite ordinary - the pace is there but no discernable melody and the vocals veer off course dramatically.

The first song to be added to this new release is the delicate drama of Leave Me, Let Me Go. As a much slower piece, it forms a mid-point break from all the chaos and energy (taking the place of Keep Me Warm) and is a pleasant surprise. Moving on, the tongue-in-cheek I Like You So Much Better When You're Naked is much more of the usual punky riot with a great hook and stadium-esque ending. Louie, which originally appears earlier in the album, is another jangly guitar romp leading (this time) into the brilliant Drive Away My Heart. Like Stella, it is a great mix of thoughtful introspection, thundering drums and more backing vocals. The aforementioned Keep Me Warm is the song of two halves, starting slow and controlled and getting a bit too over-excited in the middle, before sliding back down again. The vocals sound distant and wistful.

The final two songs, added to the original to form a completely different ending to replace See Me Through, show a change in direction. Maybe a portent for a new sound, In The End is far removed from Ida Maria's punk roots. Even with subtle wavering vocals, you can't help being drawn in by the raw vocals, old-time piano and harmonies. We're All Going To Hell takes the same approach but with added anthemic drama - recorded live, the huge sing-a-long chorus does start to get a little repetitive. The big problem here is that a relatively short, punchy half-hour album has been extended to create a different animal. This new final track seems like a step too far.

Ida Maria is far from just the antithesis of Leona Lewis. For a start she has a great band begin her. Stefan Törnby and Olle Lundin embrace the whole experience with the same dynamic drive as their lead singer. She might be the driving force but Fortress 'Round My Heart feels very much like a 'band' album. Her voice is unique and raw, lacking a polished perfection which just adds to the package. At times you wonder how many packets a day she needs or if she should switch to a 'lighter' brand, but the 'rough around the edges' sound forms an important part of her appeal. If this new release brings Ida Maria even more fame and fortune, there will be more expectation for bigger and better things. The difficult second album beckons.