New albums this month from (among others) the stadium-bound Augustines, with their brilliant eponymous follow-up to Rise Ye Sunken Ships, the ever-wonderful Suzanne Vega - back after a reworking sabbatical with new material Tales From The Realm Of The Queen Of Pentacles, and the beguiling Beck who has released his most serene, sublime work of his career: Morning Phase. Elsewhere, Mary Chapin Carpenter is cinematic, Seth Lakeman is genre-redefining, and Sun Kil Moon is autobiographically challenging. 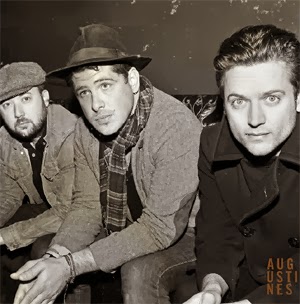 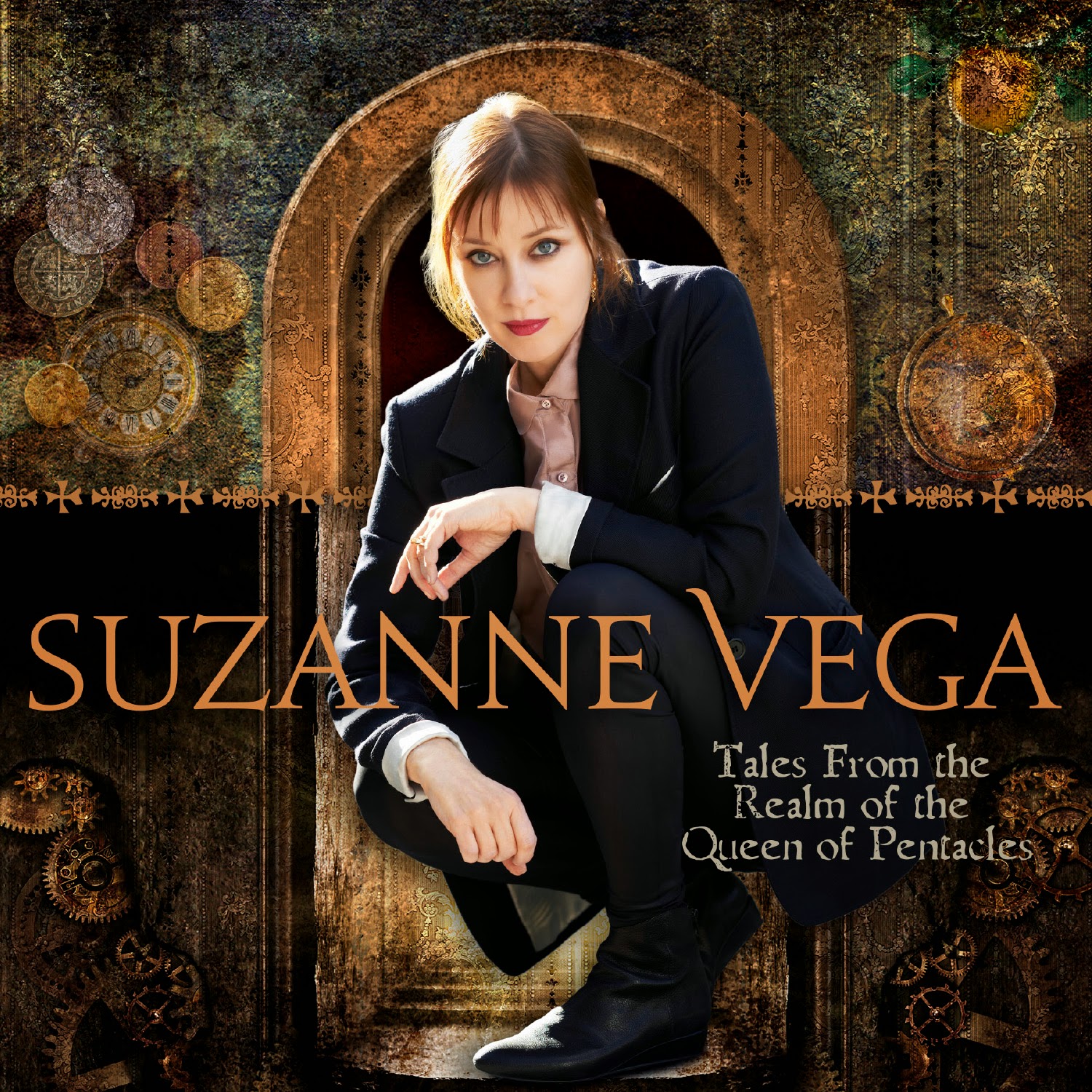 Since 2007's Beauty & Crime, Suzanne Vega has revisited her own back catalogue for the 'Close-up' series - a quartet of albums sub-titled: Love Songs, People & Places, States of Being and Songs of Family. With varied results, these form an interesting and intriguing retrospective (making the 1998 and 2003 'best of' compilations largely redundant), both a celebration for fans and much needed inspiration and reflection for Vega; not to mention income and 'ownership' - to reclaim her prized work from major labels. Now, seven years since her last studio album of new material, Tales From The Realm Of The Queen Of Pentacles brings new life to Vega's music. The title is a reference to the Tarot card representing fertility, or impending motherhood - but also a double-meaning of youthful maturity, artistry and wisdom.

It would be difficult to suggest that the 'Close-up' work has had no effect on Suzanne Vega's approach to music. On one hand, she could have ignored her past completely and continued the thread started with the deep, painful and beautiful Songs In Red And Gray, but Vega - in collaboration with producer/musician Gerry Leonard - has injected a much needed sense of fun and adventure into her storytelling. The vocal delivery of opener Crack In The Wall may be uneasy and lack the precision of, say, Penitent, but this only forms the first half of the song, as the vibrant guitar-work shines throughout. Lyrically, this is a series of beguiling metaphors while Fool's Compliant is a good a single as Vega has produced, a punchy folk-pop lament filled with jangling guitars and a superb chorus. Some gorgeous backing vocals lift the arrangement further. In contrast, I Never Wear White is pure character, Vega inhabiting a darker soul - 'Black is the truth... of my situation, and for those of my station...' is the Gothic refrain before harsh, edgy guitars kick in. The two are conjoined for the angst-driven finish.

It is now clear that Tales From The Realm Of The Queen Of Pentacles is a blend of styles and substances... On Portrait of The Knight Of Wands (another Tarot card - this time referencing a man of ideas and invention, and a time of travel and progress), Vega sings delicately of a struggle and strange imagery - 'His mission, a transmission... of technology'. The final minute is an odd juxtaposition of guitars and electronic flourish to fade. Don't Uncork What You Can't Contain takes this approach to another level, with sampling meeting Eastern rhythms for a mythical tale of curiosity and misadventure. This is the most divisive song on the album, mixing different styles and sounds but ultimately failing to deliver - a rare weak drop in form. Likewise, the constant distracting hand-claps underpinning Jacob And The Angel plague an otherwise interesting song, which glides beautifully into an instrumental string-filled finale.

Further into the second half of Tales From The Realm Of The Queen Of Pentacles, Silver Bridge is wonderful. Simple, measured and perfectly executed. 'All those nights when you can't sleep...your heart and mind is racing. Are you standing on that bridge? Which way are you facing?', sings Vega, with wide-eyed optimism, in one of the album's best moments. Song Of The Stoic take the album into different territory, a tale of abuse, fighting control and ultimate flight, as the music meanders from acoustic folk to epic soundtrack. The second half brings in vocal experimentation, somewhere between Nick Cave & The Bad Seeds and (dare to say) Mumford & Sons. The second part of this story, Laying On Of Hands / Stoic 2 is a funk-folk fuelled tribute to Mother Theresa (yes, really), an odd choice of styles with no hint of irony, before the song accelerates in a completely different direction to a soulful soup of vocals and thumping drums. Sublime. To close, Horizon (There Is A Road) is an elegant finish, even with the unexpected trumpet solo and Vega's vocal excursions (the attempt at falsetto just about works).

Suzanne Vega, as the title of this album suggests, is both an artist and a provider; a women of knowledge and wisdom. Tales From The Realm Of The Queen Of Pentacles is a rebirth, and has recaptured her youthful energy and enthusiasm via the process of examining her own songs through reinterpretation. She has survived the ruthless music business that made her a star and has come back fighting, smarter... and the result is new, risky, often brilliant, always compelling and above all, relevant. Much of the album is unexpected, yet familiar - not quite a reinvention (the albums 99.9F degrees and Nine Objects Of Desire are a world away from the humble New York poet beginnings) but this is certainly a reinvigoration and a chance to experiment and expand. What emerges is the most challenging and exciting Suzanne Vega album in fifteen years. And possibly one of her best.

Another record fair today, this time in sunny Guildford at the wonderful (yet small and cold) Guildhall. It was the usual mix of old and new, boxes of ragged dog-eared Beatles and Rolling Stones, plenty of poor-quality Bob Dylan and Bowie, and a smattering of 'newer' music. 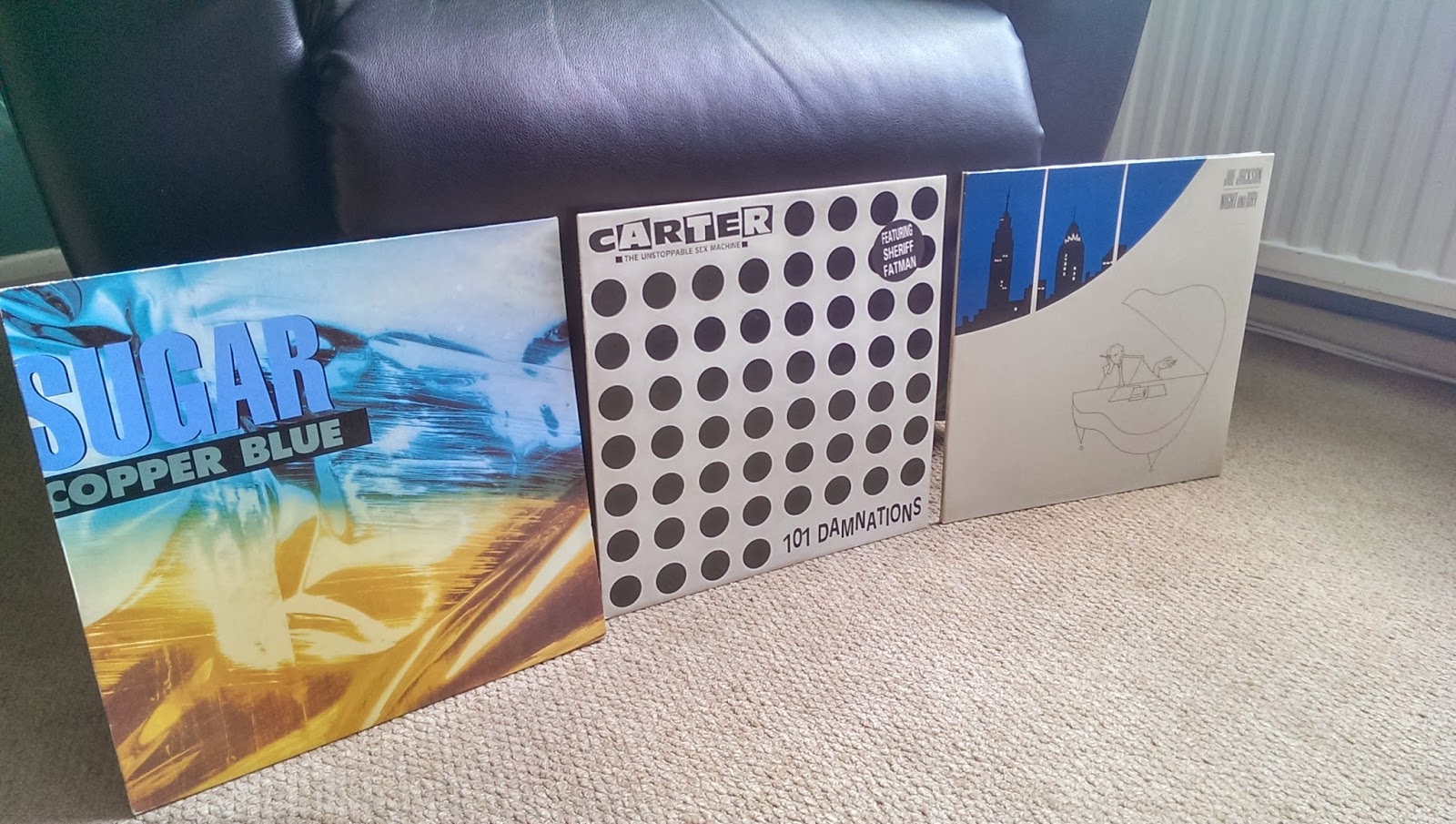 And for me, a real find: Sugar's Copper Blue, one of my favourite albums which kept me sane on many a bus journey to university in the early 90s. Like many records of this time, the pressing isn't perfect and slightly 'treble' heavy but in good condition. Two other albums caught my eye: 101 Damnations, the début from Carter, The Unstoppable Sex Machine - again, for an album that's 25 years old, it plays very well. This is a real angst-driven album of frustration and social-political songwriting which still sounds new and relevant today (and yes, Sheriff Fatman is forever magnificent). To complete the trio, Joe Jackson's Night and Day. I'm not a huge Joe Jackson fan but this is a great album; a deft blend of rough and smooth, paying homage to Cole Porter and New York City. Stepping Out is the undisputed classic but elsewhere there is astute observations and commentary. 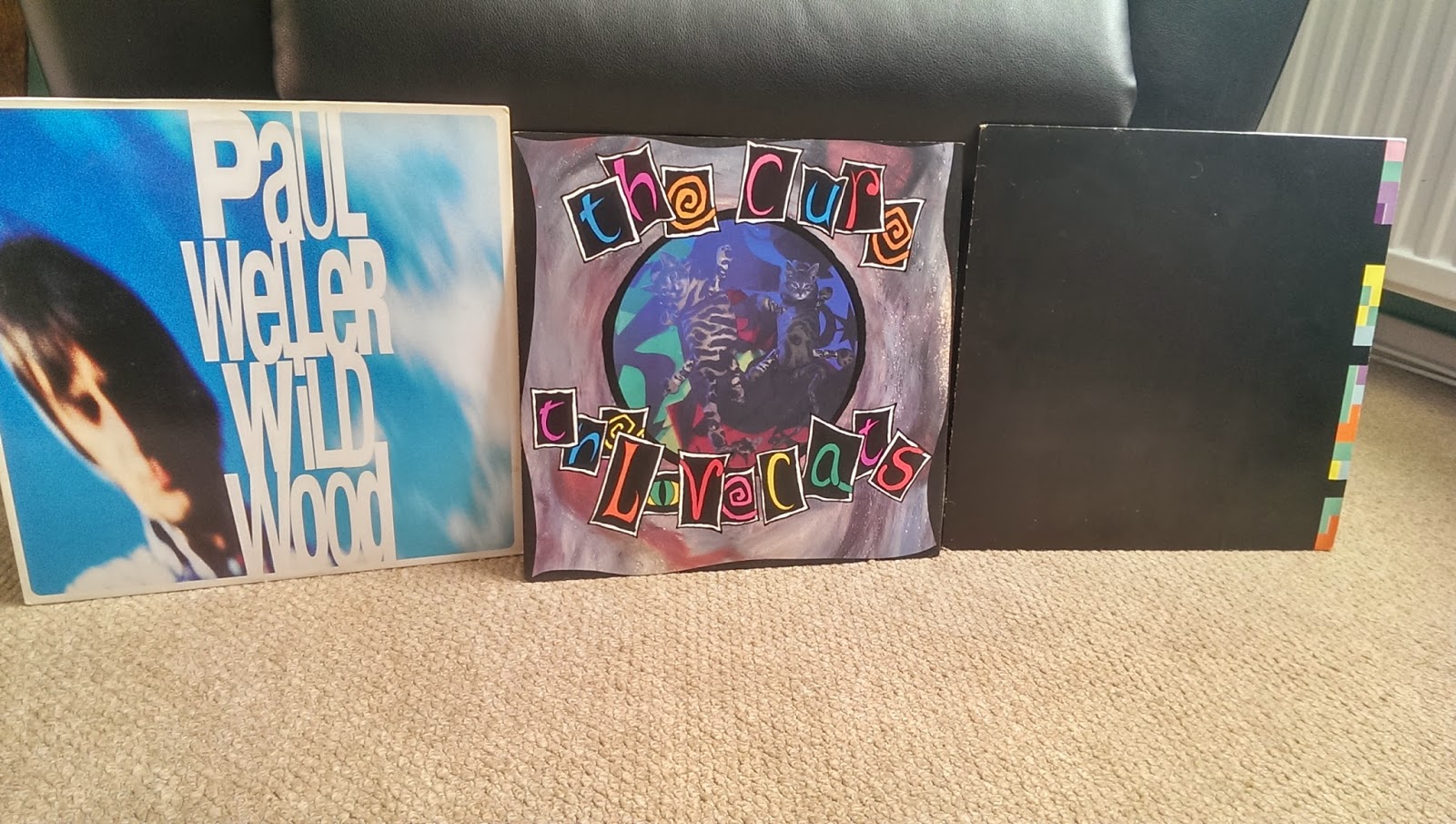 I don't usually buy 12 inch singles these days but I couldn't let these go. I've always wanted a copy of New Order's Blue Monday and the FAC73 'seven and a half minute' original single (the 12" backed with The Beach) is the grandfather of all versions since ('88 and '95'). And it plays wonderfully. From the same year is Lovecats by The Cure, another brilliant song, and the 1998 re-issue 12" of Wild Wood by Paul Weller, originally released to promote the Modern Classics greatest hits, this is backed with The Sheared Wood (Portishead) remix and Science (with The Psychonauts - Lynch Mob remix). Try and find these on Spotify :)