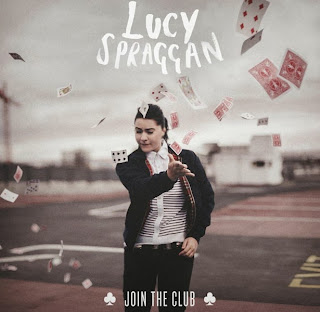 X Factor has many things to answer for but occasionally it uncovers talent. Lucy Spraggan left the show in 2012 due to illness but is one of the only 'contestants' to have entered the competition as a songwriter. Having already released her début album Top Room At The Zoo, she performed three of her own songs: Mountains, Last Night and Tea And Toast during her 'journey' to the X Factor finals, and showed what she was made of. No surprise then that Spraggan's major-label début album shows brilliance; filled with honest song-writing, observations and stories. The effect is like a female-fronted The King Blues.

The overall feel of Join The Club is nothing new, but Spraggan is a unique storyteller in the post Lily Allen/Kate Nash (pre-2010) world, and her songs are a compelling blend of acoustic pop and vocally, hip-hop (this is not Chuck D or Dr. Dre). And it's great to see (and hear) an album from a 'reality television' export filled with self-penned, personal songs. Spraggan has taken work made as an independent musician and updated it for a more professional record. That said, one of the highlights of Join The Club: the poignant Tea And Toast is the only song which would have been better left 'as is' with just a voice and a guitar. In spite of the over-production, it still packs a punch with its sadness and quirky arrangement. In contrast, Mountains is now a stadium-esque, string-laden soaring masterpiece. So it can work.

Join The Club is filled with more joyous moments: opener Someone is an instant highlight, all upbeat chorus and hope-filled melody. This is another reworking of an earlier song that works well with more tempo. Lighthouse is hope in a hopeless world, and The Tourist is wonderful story-telling ('I'll be halfway round the world before you even know I'm gone') that builds to an open, unresolved, conclusion. Wait For Me could be a Mumford & Sons cover, complete with choral backing vocals, and Let Go is a listless love-song - an odd vocal arrangement mixes with stark piano and lyrical determination; personal and moving. The title track keeps things measured even through it's a metaphor too far ('life is just a gamble so just enjoy the game'). Closer, Paper Dreams is a fitting finale - inward-looking pop with electronic flourishes: 'Even if I look stupid, I'm pretty happy... If you're having fun, don't care what you look like...as long as you're smiling, you got the game right' is straight from the heart. The chaotic finish is fun but awkward.

Elsewhere, 91 shows that there is more to Spraggan's vocals than staccato delivery; a gorgeous chorus framed in an acoustic waltz. In A State tells the start-stop (bad pun) story of an America road-trip (even if LA and NYC aren't States...), and Last Night (Beer Fear) is either a misjudged celebration of drinking culture or a waning sign. It's hard to tell from the delivery, sounding like a song Alex Turner rejected ten years ago. You're Too Young is a real surprise - more spoken word than a song, delivered at speed through the verses and slowing for the choruses. This almost works but the contrast is hard to engage with - a brilliant idea, like Eminem's Stan.

Whether Lucy Spraggan would have made Join The Club without X Factor, only she knows. Either way, it is a talent showcased through a unique personality and superb songwriting. The platform created from Top Room At The Zoo and her exposure on a prime-time reality music show has produced the album she wanted; a hybrid of old ideas and emotions and new experiences. Serendipity realised and a talent enthused and energised.